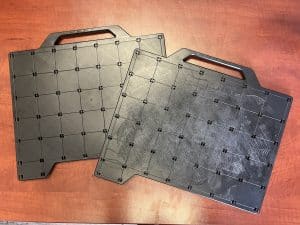 Stratasys F123 Series build trays can be reused; however, how many times you reuse them will depend on your level of comfort.

For the lowest risk, make sure your build prints on an unused section of the tray. The support material will leave a slight white stain, and the system’s screen will display a shadow where previous builds were placed.

At AdvancedTek, we like to get the most use out of our trays and have been successful printing over the same areas of a tray several times with smaller footprint builds. It is best to place your build over both used and unused areas, trying to keep edges on unused tray surface to reduce any curling. For larger footprints that take up more than half the tray and you’re concerned about curling, we recommend printing on a completely unused area or a new build sheet.

A note of caution: repetitive use of a build tray surface will, over time, decrease the adhesion of a new part. This could cause your part to detach and the part to fail, possibly even damaging the machine.

Something our application engineers often do to get one last use from a build tray is add a layer of model material below the part’s normal base layer of support material, which can can be done either in GrabCAD Print or on the printer screen. The model material will strongly adhere to the build tray, thereby reducing the risk of warping, and the part can still easily be removed at the base layer of support. Continue until all available space has been used and then dispose of the tray. 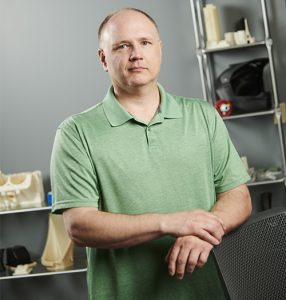 Scott has been a field service engineer at AdvancedTek for the past four years, supporting our Wisconsin customers with printer installation, repairs, PMs, training, and phone support.

Have a question for our 3D printing experts?

Submit one here for a future edition of 'Ask a 3D Printing Expert'!