Home // News // Customer Spotlight: A Marriage of Tradition and Future

How one company found the path of least resistance – combining traditional and additive manufacturing to become an automated powerhouse. 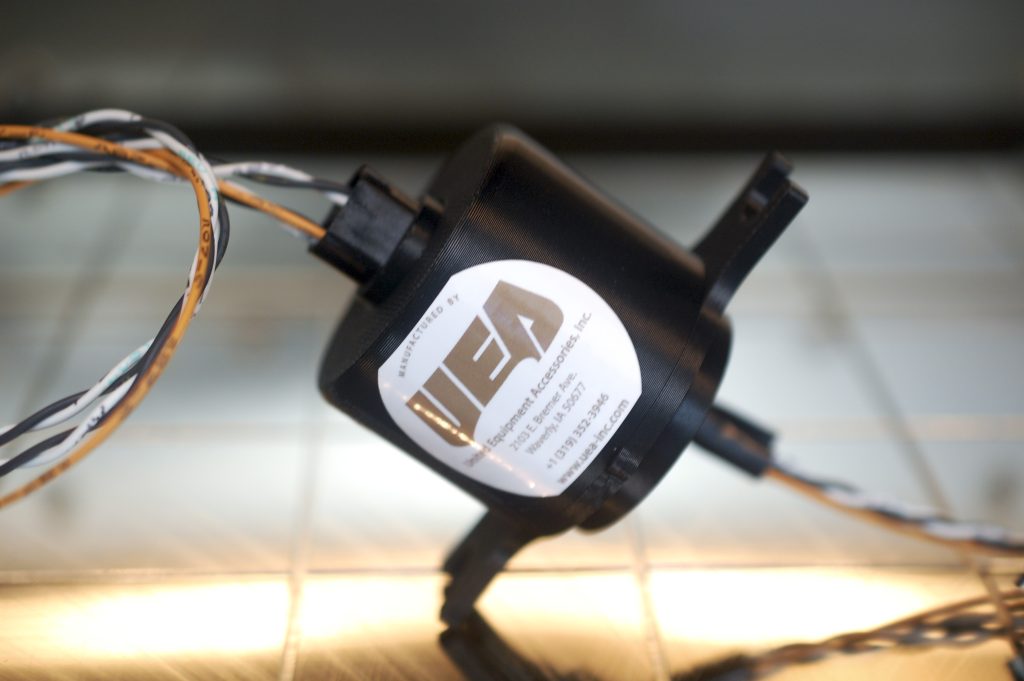 For over 65 years, Iowa’s United Equipment Accessories (UEA) has been engineering and manufacturing custom slip rings, rotary unions, cable reels, and shift controls for various industries throughout the US and worldwide.

The company’s core purpose is solving problems and manufacturing highly engineered customized motion products. This purpose continuously keeps UEA striving to improve its processes and think outside the traditional box to give its customers the most customized experience as quickly as possible. 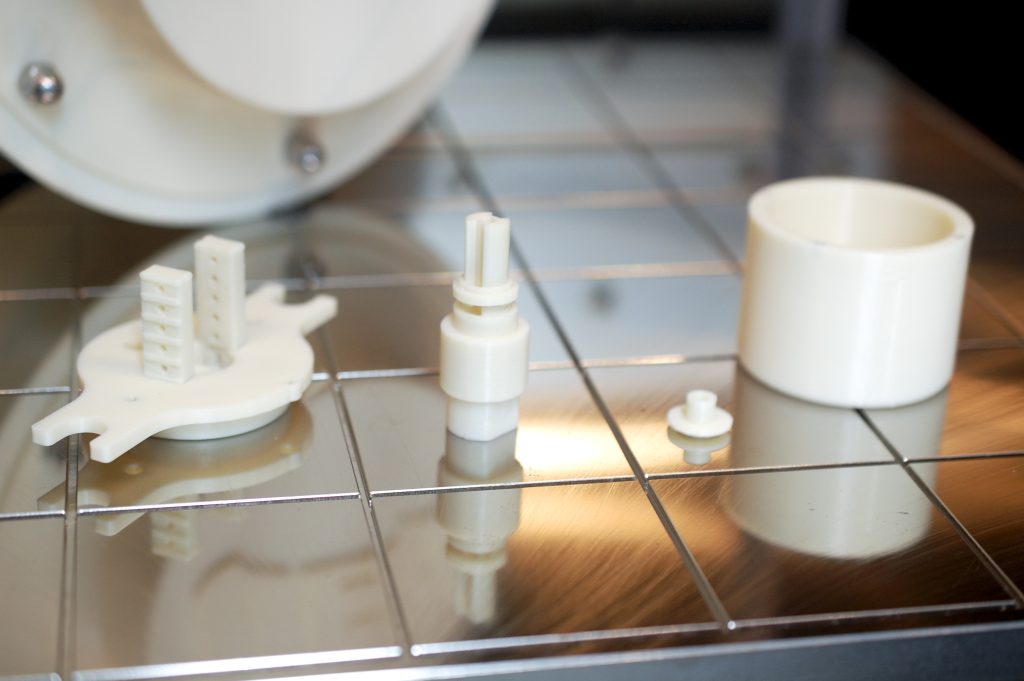 With their business laser-focused on customization for their customers, UEA quickly adopted additive manufacturing (3D Printing) for prototyping applications. To get their feet wet, they started with a few small, lower-cost desktop printers. Engineers used them to quickly print and validate designs before ever hitting the shop floor. They ran potential mistakes on a printer in hours instead of days on a CNC machine (“fail fast” as we like to call it). They even brought old parts back to life with printed improvements that the UEA team could present to current customers.

Fast-forward four years, UEA continues to find more applications for 3D printing. Their hydraulic swivel line has grown exponentially, and the demand for new one-off slip rings is steadily increasing. And as with any new growth comes new opportunities and new problems, prompting the team to look at Manufacturing 4.0 to help them scale. Like so many other businesses facing the current labor shortages, UEA is no exception to the challenge of finding qualified CNC programmers and machinists.

With success in their current 3D printers, the engineering team wanted to explore other ways to automate and free up their CNC machines for more revenue-generating products. UEA’s CEO, Deborah Malek, had been in talks with Stratasys (the industry leader in additive manufacturing) for almost two years about the adoption of industrial grade 3D printing systems. However, it wasn’t until a new Manufacturing 4.0 Technology Investment Program made available by the Iowa Economic Development Authority (IEDA) that UEA put the wheels into motion.

Manufacturing Technology Investment Grants are one of many tools IEDA implements to assist Iowa businesses like UEA adopt and integrate smart technologies into their operations. Iowa’s Manufacturing 4.0 initiative began in 2020 after recognizing the critical need to examine and support manufacturers’ abilities to incorporate advancing technologies and ensure businesses of all sizes continue to remain competitive in the global economy. IEDA embraced the initiative as manufacturing is Iowa’s largest industry, contributing $31 billion to the state’s economy. In addition, Iowa’s 4,100 manufacturers employ 15% of the state’s total workforce.

A critical component of this initiative is the industry-led strategic plan that IEDA released, which includes recommendations for navigating the Manufacturing 4.0 journey. The efforts were led by the Iowa Innovation Council, an advisory group of business leaders representing advanced manufacturing, IT, bioscience and education that scan the landscape for what’s coming up in Iowa’s industries. A few years ago, this thinktank launched a deep dive into Industry 4.0 and evaluated where the current workforce is utilizing the newest disruptive technology – automation. 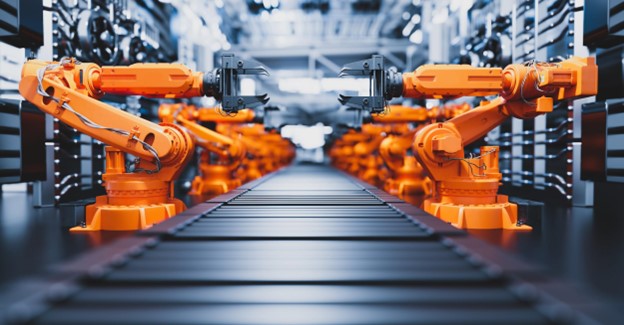 With the industry’s economic strength representing 17.3% of the state’s GDP, coupled with nationwide labor shortages, it is important that automation is incorporated as a supplement to fill and upskill the workforce. The Manufacturing 4.0 Investment Grant helps to boost productivity and efficiency with the existing workforce through the purchase of innovative equipment or Internet of Things infrastructure – robotics, 3D printing, automated CNC machines, and software for data analytics, among others. With the transition to increasingly digital operations and functionality, manufacturers can maintain their competitiveness and succeed on a global scale.

Since taking the first step is the hardest part for any business, IEDA is helping to ease that transition for Iowa manufacturers by mitigating some of the financial risk through the grant program. The Manufacturing 4.0 initiative, which encompasses the grants and other resources offered by the state’s strong manufacturing ecosystem, propels the integration of new technologies to avoid being left behind in the technology revolution.

UEA jumped at the chance for the grant funding and secured enough money to optimize their automation efforts to fund four projects. Of those four projects, one included the acquisition of a Stratasys 450mc FDM industrial 3D printer, one with a much larger build size than their desktop systems and offers materials for higher temperature applications.

UEA had stated in their grant application that adopting advanced 3D printing technology like the Fortus 450mc would help resolve constraints in their slip ring assembly by creating various plastic sub assembly components at a competitive price. At the time, the company was purchasing these components and raw materials from different US suppliers or manufacturing in-house, but due to the world wide supply chain issues as a result from the COVID-19 pandemic and rising of material costs, it was difficult for UEA to source the components at a reasonable cost and in a timely manner. The company also cited its limitation of manufacturing multiple new products in-house at one time due to staffing challenges with CNC programmers and machinists. Expanded 3D printing capabilities would allow UEA to manufacture prototype designs in a matter of days vs. waiting 6-12 weeks for an outside supplier to deliver prototype parts.

To put some real numbers behind UEA’s selection of the Fortus 450mc, the UEA team evaluated their existing parts and found 145 unique pieces with various annual quantities that would result in approximately $45,000 cost savings by 3D printing instead of machining raw materials. 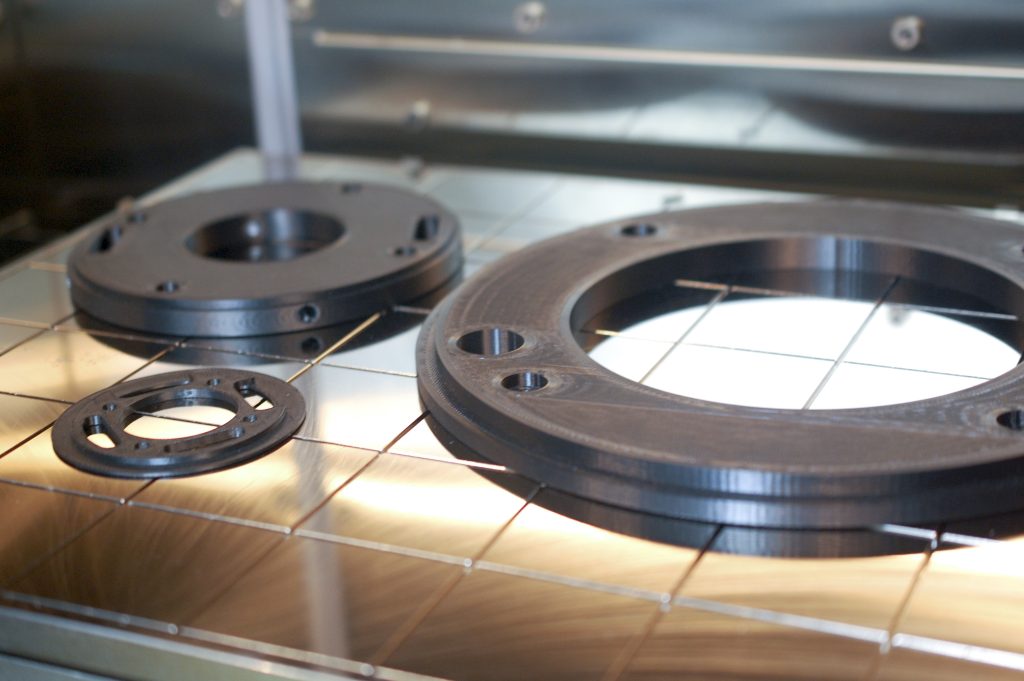 Not only were the cost savings a driver in their decision, but inconsistencies with their current desktop printers were not sustainable from a production perspective. When we interviewed Ben Amfahr, a manufacturing engineer at UEA, he was eager to offer up his view of their desktop printers vs. their new F450: “While they’re great for prototyping and R&D, when you need true higher-volume parts, the [lower cost, desktop] machines tend to get “fussy” with high print hours. Being able to put a part file in the slicer software, slice it, print it [on the Fortus 450mc), and having it come out to the right size is a game changer. There’s no messing with settings, no messing with having all my temps right in the slicer software or having to up-size all the holes in the model. I have spent so many hours modeling a part for assembly and then modeling the part to print – I don’t have to do that now. When I have a ¾” hole, it prints a ¾” hole within a couple of thousandths.”

Ben has freed up engineering time by enabling the production team to quickly slice the parts instead of spending hours creating multiple G-Code files with traditional methods. The team can print it all in one build, whether they need 5-10 of the same part or numerous designs. Ben has calculated over 4,000 hours of new print time for their Fortus 450mc. Parts traditionally produced on their CNC machines have been reallocated to the new printer.

With Stratasys and their Platinum Partner, AdvancedTek, headquartered in Minnesota, Ben has found that their reps are very accessible and can drop in at a moment’s notice when needed. In addition, if the machine goes down, AdvancedTek provides UEA with backup printing until their machine is back online, meaning no loss in production for the company. 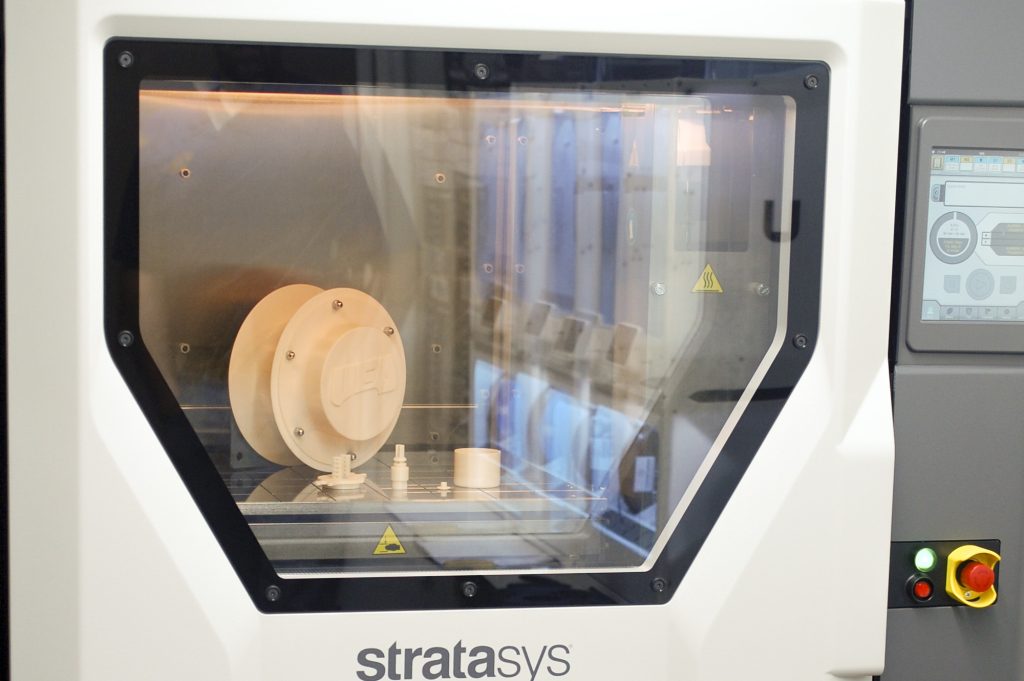 With four new automation projects underway, some might wonder where that leaves UEA’s workers. Will the machine replace the person? The answer from UEA was a firm NO. Instead, they have been able to redeploy their labor resources into other areas that require more complicated tasks and allocate the easy stuff for the machines. As a result, UEA is looking for even more talent – adding to their workforce, not subtracting from it.

UEA has proven that additive manufacturing doesn’t diminish the skilled labor workforce but makes jobs easier and more efficient. They are programming more parts per hour and optimizing existing machines. Proving that with the proper perspective and skillset, additive manufacturing has a place on the shop floor, working harmoniously with traditional methods.

Want to learn how additive manufacturing can benefit your business? Contact our 3D printing experts today!

Write-off your entire purchase in 2021 with Section 179 Deduction