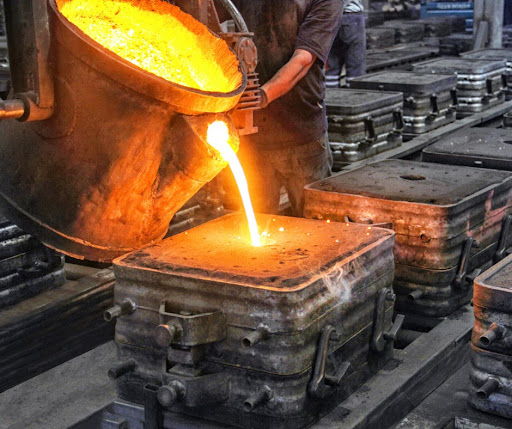 When you picture a foundry, what type of images come to mind?  An industrial melting furnace? Molten metal being poured into molds? Racks of hanging casting patterns? 3D printers?

The first few are probably obvious, but 3D printers? Why would a foundry have a 3D printer? Great question! To learn more, let’s take a look at one Midwestern foundry’s journey to adopting the technology.

Seneca Foundry’s story begins in 1907 in Burlington, Colorado. Founder William Arnold (W.A.) McCollough was working as a blacksmith and farmer when he invented a new hog feeding trough. His patent was issued in September of 1909, and shortly after, he and his family relocated to Iowa, leased a facility, and formed W.A. McCollough & Sons (later to be renamed Seneca Foundry). By 1940, the company was producing 45% of the country’s hog self-feeders. The other 55% were made by 24 different manufacturers, so the company was doing rather well. 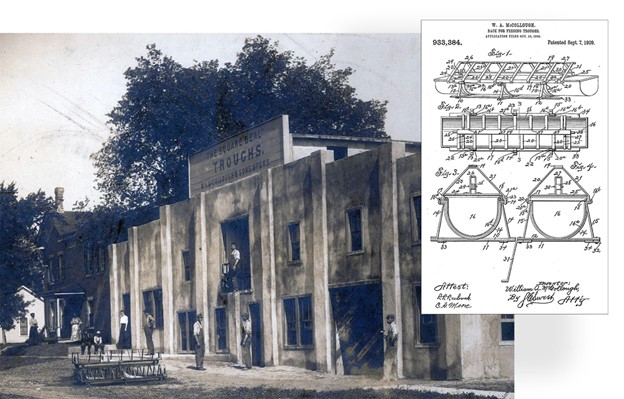 As the business grew, the McColloughs utilized their skills to produce a wide variety of additional parts, including swing sets, picnic table bases, farm gates, and poultry feeding equipment, to name a few. At one point, they even developed the precursor to today’s hospital beds. The company was never afraid to invest in new technology to push them forward and be innovative.

In the 2000s, Seneca initiated lean manufacturing to reduce waste and improve efficiency. However, production of gates and risers remained mostly manual and was completed by their in-house pattern shop employee, Dwight, who has recently announced his plan to retire in the next 3 to 4 years. 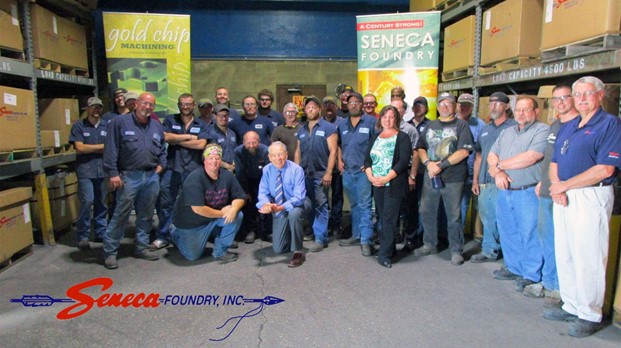 In preparation for Dwight’s retirement, knowing that it would be difficult to find a replacement with his production skills, Seneca began seeking alternative solutions for producing their gates and risers. Conversations with other pattern makers, factories, and foundries about their needs introduced them to the idea of 3D printing. Like many metal manufacturing companies, the concept of plastic 3D printing didn’t seem like a viable solution for them – at least at first.

Around this time, two Seneca employees had recently graduated from the University of Northern Iowa’s metal casting program where they had hands-on access to the school’s 3D printing lab. Between their knowledge and interest in the technology and the recommendations of others in the industry, Seneca decided to give it a try and invested in a low-cost entry-level 3D printer.

They quickly found, however, the printer was very finicky, requiring extensive maintenance and babysitting that they didn’t have the time nor manpower to deal with. The same parts had to be printed repeatedly in order to get one semi-useful part, and the printer’s manufacturer offered no support. Without the ability to dedicate a single person to operating the printer, it was used less and less over time and Seneca found themselves unable to utilize 3D printing to its full potential.

This is a common situation many companies that invest in a low-cost entry-level system find themselves in and is usually the point where one of two paths are taken: (1) Decide 3D printing isn’t a good fit and move on completely, or (2) keep the initial vision for 3D printing alive but do further research to find a better solution.

Thankfully, Seneca took the second option and began to explore more industrial systems. They spoke with another pattern maker who had experimented with printing gates and risers on an industrial printer with excellent results. They also consulted with another foundry that had two Stratasys printers (Fortus 250mc & 450mc) for producing prototyping and low-volume patterns. Nearly all the pain points Seneca had with their low-end printer didn’t seem to exist for the others when using a higher-end system.

The success of 3D printing for these other companies was inspiring, but they knew their current printer was not going to get them there. That’s when Seneca decided they needed a partner to help them choose the right printer and be able to guide them through expanding 3D printing in their company. Based on the other foundry’s positive feedback regarding their experience with AdvancedTek and Stratasys 3D printers, Seneca got in touch with AdvancedTek for assistance.

The company had a shortlist of must-haves when choosing their new 3D printer. Specifically, their printer must:

AdvancedTek, having 25 years’ experience connecting businesses with additive solutions, took the time to understand Seneca’s needs, goals, and opportunities to collaboratively determine the Stratasys F170 was a great fit. 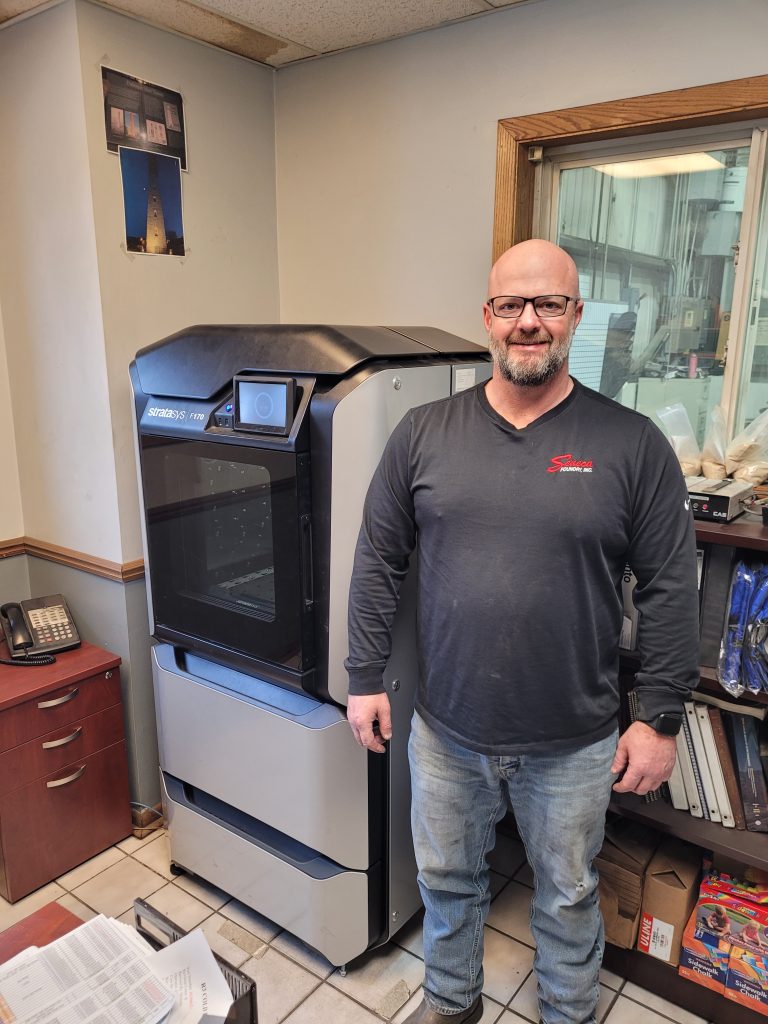 “AdvancedTek definitely services their customers, which is one of the key things we were looking for.” – Jeff Vorhies | Sales Engineer at Seneca Foundry

The F170 is an easy to operate and maintain industrial-grade printer with high levels of accuracy and repeatability.  In addition, the system’s build size and material options matched the company’s needs, and the price was within their budget. The financial investment was going to be three times higher than their current printer, but if it delivered on its promises, they knew it would be well worth it. Feeling confident, Seneca made the decision to purchase their first Stratasys 3D printer.

Before their F170 even arrived, the company had already queued up their first four print jobs in the Stratasys GrabCAD Print software. Once the printer was installed, they immediately put it to work and haven’t stopped since. In the 10 weeks they’ve had their system, the team has printed more than 70 parts with over 600 hours of print time. The reliability and repeatability of their F170 has been a game-changer.  Jeff states they are now able to queue up multiple jobs and rely on an hourly employee to swap out the trays and filament with no concern for failed prints.

How Seneca Foundry is Utilizing Their Printer

Traditionally, gates, risers and runners are handcrafted from wood or composites. By 3D printing these parts, Dwight has been able to shift his focus to other high-value tasks, allowing projects to be completed in shorter time frames. He admits at first he found himself somewhat resistant to 3D printing, but has since fully embraced the technology. In fact, he hasn’t hand-cut anything since they purchased their F170. 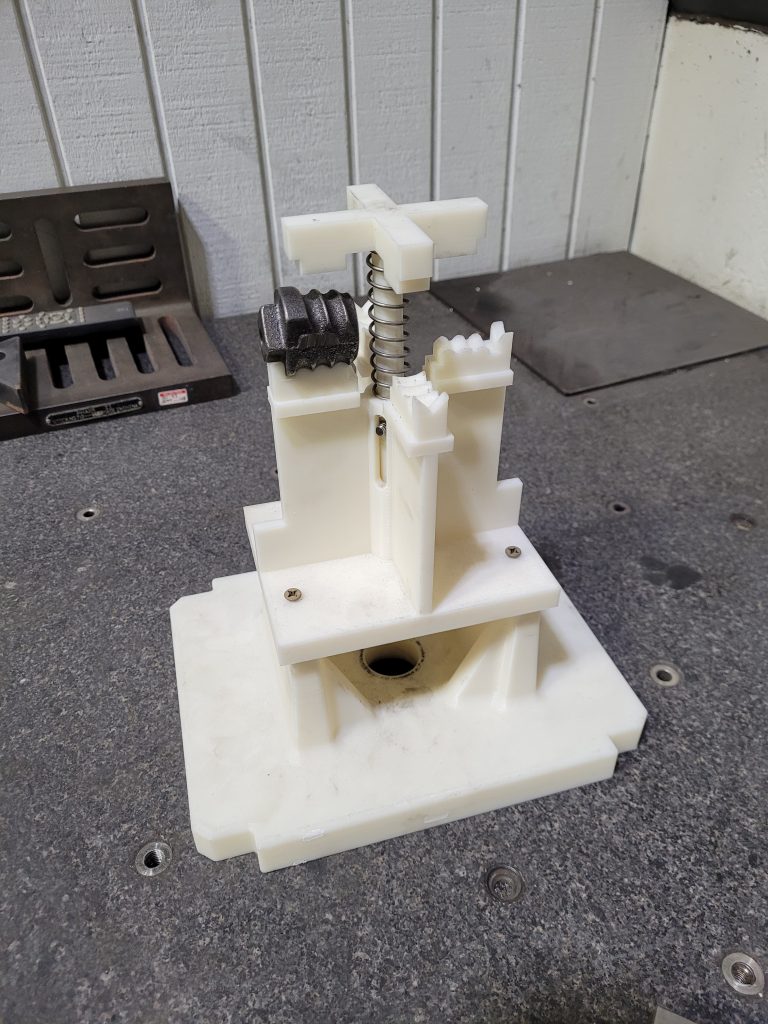 eff designed and printed a prototype fixture for their automated grinding machine. The printed part could be mounted on the machine and driven around to ensure there weren’t any interference issues. Using a 3D printed part also allowed Seneca to keep their production equipment free for other projects until they were ready to move forward.

In most cases, a machine shop needs a part in hand in order to build fixtures to aid in the part’s production. To speed up this process, Seneca will 3D print a model of the part to help communicate any part-specific details and allows them to get a head start on building fixtures.

Seneca now sees 3D printing as a key component of their company, and is finding more and more applications for it every day. What started as a search to fill a need turned into an opportunity for growth.

If your company has dabbled with 3D printing or you’ve been on the fence, we hope this story inspires you. If a foundry with a 100-year history can benefit from 3D printing, imagine what it can do for your business.

The best part is that you don’t have to do the research yourself. AdvancedTek has assisted hundreds of Midwest companies like Seneca thrive with 3D printing, and we’d love to help you too. So reach out to us, and we’ll help you discover what is possible.

Interested in receiving a sample part? Request yours below!